(by U.S. Department of Health and Human Services-National Istitutes of Health)

Testicular cancer is a disease in which cells become malignant (cancerous) in one or both testicles.

The testicles (also called testes or gonads) are a pair of male sex glands. They produce and store sperm and are the main source of testosterone (male hormones) in men. These hormones control the development of the reproductive organs and other male physical characteristics. The testicles are located under the penis in a sac-like pouch called the scrotum.

Based on the characteristics of the cells in the tumor, testicular cancers are classified as seminomas or nonseminomas. Other types of cancer that arise in the testicles are rare and are not described here. Seminomas may be one of three types: classic, anaplastic, or spermatocytic. Types of nonseminomas include choriocarcinoma, embryonal carcinoma, teratoma, and yolk sac tumors. Testicular tumors may contain both seminoma and nonseminoma cells.

The exact causes of testicular cancer are not known. However, studies have shown that several factors increase a man’s chance of developing this disease

- Congenital abnormalities: Men born with abnormalities of the testicles, penis, or kidneys, as well as those with inguinal hernia (hernia in the groin area, where the thigh meets the abdomen), may be at increased risk.

Most testicular cancers are found by men themselves. Also, doctors generally examine the testicles during routine physical exams. Between regular checkups, if a man notices anything unusual about his testicles, he should talk with his doctor. Men should see a doctor if they notice any of the following symptoms:

- a painless lump or swelling in a testicle

- pain or discomfort in a testicle or in the scrotum

- a feeling of heaviness in the scrotum

- a dull ache in the lower abdomen, back, or groin

- a sudden collection of fluid in the scrotum

These symptoms can be caused by cancer or by other conditions. It is important to see a doctor to determine the cause of any of these symptoms.

To help find the cause of symptoms, the doctor evaluates a man’s general health. The doctor also performs a physical exam and may order laboratory and diagnostic tests. These tests include:

- Blood tests that measure the levels of tumor markers. Tumor markers are substances often found in higher-than-normal amounts when cancer is present. Tumor markers such as alpha-fetoprotein (AFP), Beta-human chorionic gonadotropin (βHCG), and lactate dehydrogenase (LDH) may suggest the presence of a testicular tumor, even if it is too small to be detected by physical exams or imaging tests.

- Ultrasound, a test in which high-frequency sound waves are bounced off internal organs and tissues. Their echoes produce a picture called a sonogram. Ultrasound of the scrotum can show the presence and size of a mass in the testicle. It is also helpful in ruling out other conditions, such as swelling due to infection or a collection of fluid unrelated to cancer.

- Biopsy (microscopic examination of testicular tissue by a pathologist) to determine whether cancer is present. In nearly all cases of suspected cancer, the entire affected testicle is removed through an incision in the groin. This procedure is called radical inguinal orchiectomy. In rare cases (for example, when a man has only one testicle), the surgeon performs an inguinal biopsy, removing a sample of tissue from the testicle through an incision in the groin and proceeding with orchiectomy only if the pathologist finds cancer cells. (The surgeon does not cut through the scrotum to remove tissue. If the problem is cancer, this procedure could cause the disease to spread.)

If testicular cancer is found, more tests are needed to find out if the cancer has spread from the testicle to other parts of the body. Determining the stage (extent) of the disease helps the doctor to plan appropriate treatment.

Although the incidence of testicular cancer has risen in recent years, more than 95 percent of cases can be cured. Treatment is more likely to be successful when testicular cancer is found early. In addition, treatment can often be less aggressive and may cause fewer side effects.

Most men with testicular cancer can be cured with surgery, radiation therapy, and/or chemotherapy. The side effects depend on the type of treatment and may be different for each person.

Seminomas and nonseminomas grow and spread differently and are treated differently. Nonseminomas tend to grow and spread more quickly; seminomas are more sensitive to radiation. If the tumor contains both seminoma and nonseminoma cells, it is treated as a nonseminoma. Treatment also depends on the stage of the cancer, the patient’s age and general health, and other factors. Treatment is often provided by a team of specialists, which may include a surgeon, a medical oncologist, and a radiation oncologist.

The three types of standard treatment are described below.

- Surgery to remove the testicle through an incision in the groin is called a radical inguinal orchiectomy. Men may be concerned that losing a testicle will affect their ability to have sexual intercourse or make them sterile (unable to produce children). However, a man with one healthy testicle can still have a normal erection and produce sperm. Therefore, an operation to remove one testicle does not make a man impotent (unable to have an erection) and seldom interferes with fertility (the ability to produce children). For cosmetic purposes, men can have a prosthesis (an artificial testicle) placed in the scrotum at the time of their orchiectomy or at any time afterward.

- Some of the lymph nodes located deep in the abdomen may also be removed (lymph node dissection). This type of surgery does not usually change a man’s ability to have an erection or an orgasm, but it can cause problems with fertility if it interferes with ejaculation. Patients may wish to talk with their doctor about the possibility of removing the lymph nodes using a special nerve-sparing surgical technique that may preserve the ability to ejaculate normally.

- Radiation therapy (also called radiotherapy) uses high-energy rays to kill cancer cells and shrink tumors. It is a local therapy, meaning that it affects cancer cells only in the treated areas. External radiation (from a machine outside the body), aimed at the lymph nodes in the abdomen, is used to treat seminomas. It is usually given after surgery. Because nonseminomas are less sensitive to radiation, men with this type of cancer usually do not undergo radiation therapy.

- Chemotherapy is the use of anticancer drugs to kill cancer cells. When chemotherapy is given to testicular cancer patients, it is usually given as adjuvant therapy (after surgery) to destroy cancerous cells that may remain in the body. Chemotherapy may also be the initial treatment if the cancer is advanced; that is, if it has spread outside the testicle at the time of the diagnosis. Most anticancer drugs are given by injection into a vein.

- Chemotherapy is a systemic therapy, meaning drugs travel through the bloodstream and affect normal as well as cancerous cells throughout the body. The side effects depend largely on the specific drugs and the doses. Common side effects include nausea, hair loss, fatigue, diarrhea, vomiting, fever, chills, coughing/shortness of breath, mouth sores, or skin rash. Other side effects include dizziness, numbness, loss of reflexes, or difficulty hearing. Some anticancer drugs also interfere with sperm production. Although the reduction in sperm count is permanent for some patients, many others recover their fertility.

- Some men with advanced or recurrent testicular cancer may undergo treatment with very high doses of chemotherapy. These high doses of chemotherapy kill cancer cells, but they also destroy the bone marrow, which makes and stores blood cells. Such treatment can be given only if patients undergo a bone marrow transplant. In a transplant, bone marrow stem cells are removed from the patient before chemotherapy is administered. These cells are frozen temporarily and then thawed and returned to the patient through a needle (like a blood transfusion) after the high-dose chemotherapy has been administered.

Men with testicular cancer should discuss their concerns about sexual function and fertility with their doctor. It is important to know that men with testicular cancer often have fertility problems even before their cancer is treated. If a man has pre-existing fertility problems, or if he is to have treatment that might lead to infertility, he may want to ask the doctor about sperm banking (freezing sperm before treatment for use in the future). This procedure allows some men to have children even if the treatment causes loss of fertility.

Regular follow-up exams are extremely important for men who have been treated for testicular cancer. Like all cancers, testicular cancer can recur (come back). Men who have had testicular cancer should see their doctor regularly and should report any unusual symptoms right away. Follow-up varies for different types and stages of testicular cancer. Generally, patients are checked frequently by their doctor and have regular blood tests to measure tumor marker levels. They also have regular x-rays and computed tomography, also called CT scans or CAT scans (detailed pictures of areas inside the body created by a computer linked to an x-ray machine). Men who have had testicular cancer have an increased likelihood of developing cancer in the remaining testicle. Patients treated with chemotherapy may have an increased risk of certain types of leukemia, as well as other types of cancer. Regular follow-up care ensures that changes in health are discussed and that problems are treated as soon as possible.

Testicular cancer: What is it? 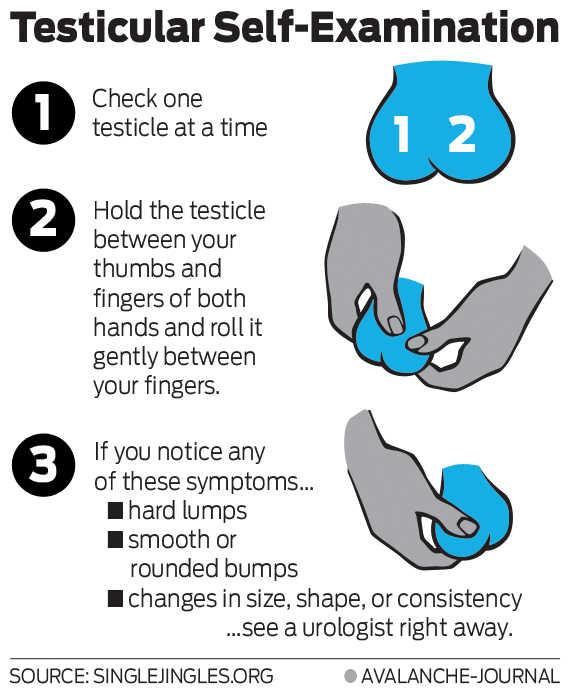 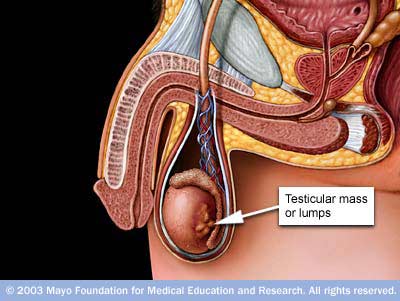 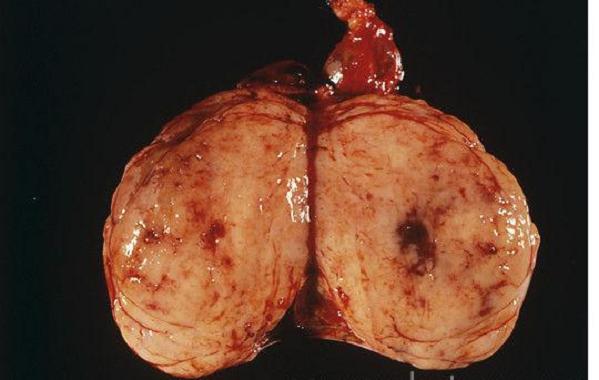