Cryptorchidism (C) is a medical term referring to absence from the scrotum of one or both testes [derived from the Greek words "crypto" (meaning "hidden") and "orchid" (meaning "testicle")], is the most frequent congenital abnormality of the male genitalia with an incidence of 2-5% at birth. At the age of 3 months, the incidence is reduced spontaneously to 1-2%. Approximately 20% of undescended testes are non-palpable and may be located within the abdominal cavity. A testis absent from the normal scrotal position can be:

- found anywhere along the "path of descent" from high in the posterior (retroperitoneal) abdomen, just below the kidney, to the inguinal ring

- ectopic, that is, found to have "wandered" from that path, usually outside the inguinal canal and sometimes even under the skin of the thigh, the perineum, the opposite scrotum, and femoral canal

- found to be undeveloped (hypoplastic) or severely abnormal (dysgenetic)

- found to have vanished.

Although cryptorchidism nearly always refers to congenital absence or maldescent, a testis observed in the scrotum in early infancy can occasionally "reascend" (move back up) into the inguinal canal. A testis which can readily move or be moved between the scrotum and canal is referred to as “retractile”. This condition does not need any form of treatment except observation as they can become ascendant. Retractile testes have completed their descent but may be found in the groin because of a strong cremasteric reflex. This reflex is elicited by lightly stroking the superior and medial part of the thigh in a downward direction. The normal response is a contraction of the cremaster muscle that pulls up the scrotum and testis on the side stroked. Cryptorchidism occurs at a much higher rate in a large number of congenital malformation syndromes. In the case of bilateral non-palpable testes and any suggestion of sexual differentiation problems, such as hypospadias [a birth defect of the urethra in the male that involves an abnormally placed urinary meatus (opening). Instead of opening at the tip of the glans of the penis, a hypospadic urethra opens anywhere along a line (the urethral groove) running from the tip along the underside (ventral aspect) of the shaft to the junction of the penis and scrotum or perineum], urgent endocrinological and genetic evaluation is mandatory. In most full-term infant boys with cryptorchidism but no other genital abnormalities, a cause cannot be found, making this a common, sporadic, unexplained birth defect. Although severely premature infants can be born before descent of testes, there is a strong association of cryptorchidism with low birthweight due to either prematurity or intrauterine growth retardation. In these infants there is usually no evidence of hormonal malfunction. Associated inguinal hernias are common. Hormonal abnormalities (deficiency or insensitivity to androgens) can be demonstrated in a high proportion of those with evidence of undervirilization or ambiguity such as hypospadias or micropenis. A contributing role of environmental chemicals — endocrine disruptors — that interfere with normal fetal hormone balance has been proposed as well, similar to the effects of diethylstilbestrol exposure. It is rarely possible to implicate a specific chemical exposure for an individual child. Occasional instances of other genetic defects involving development or function of the gubernaculum (a ligament which connects the testis to the scrotum) have been reported. Gene mutations can cause cryptorchidism in animals but remain a largely theoretical possibility in humans. Rare iatrogenic cases have also been reported in which hernia repair or other surgery in the inguinal area resulted in trapping of a testis above the scrotum. A 2006 study showed that regular alcool consumption during pregnancy (5 or more drinks per week) is associated with a 3x increase in cryptorchidism, when compared to non-drinking mothers. Other previously known risk factors include exposure to pesticides, low birth weight (including premature birth), gestational diabetes and being a twin.

The most common diagnostic dilemma in otherwise normal boys is distinguishing a retractile testis from a testis that will not/cannot descend spontaneously into the scrotum. Retractile testes are more common than truly undescended testes and do not need to be operated on. In normal males, as the cremaster muscle relaxes or contracts, the testis moves lower or higher ("retracts") in the scrotum. This cremasteric reflex is much more active in infant boys than older men. A retractile testis high in the scrotum can be difficult to distinguish from a position in the lower inguinal canal. Though there are various maneuvers used to do so, such as using a crosslegged position, soaping the examiner's fingers, or examining in a warm bath, the benefit of surgery in these cases can be a matter of clinical judgement. In the minority of cases with bilaterally non-palpable testes, further testing to locate the testes, assess their function, and exclude additional problems is often useful. Pelvic ultrasound or magnetic resonance imaging can often, but not invariably, locate the testes while confirming absence of a uterus. A karyotype can confirm or exclude forms of dysgenetic primary hypogonadism, such as Klinefelter syndrome or mixed gonadal dysgenesis. Hormone levels can help confirm that there are hormonally functional testes. In the even smaller minority of cryptorchid infants who have other obvious birth defects of the genitalia, further testing is crucial and has a high likelihood of detecting an intersex condition or other anatomic anomalies. Ambiguity can indicate either impaired androgen synthesis or reduced sensitivity. An unambiguous micropenis, especially accompanied by hypoglycemia or jaundice, suggests congenital hypopituitarism.

Many men who were born with undescended testes have reduced fertility, even after orchiopexy in infancy. The reduction with unilateral cryptorchidism is subtle, with a reported infertility rate of about 10%, compared with about 6% reported by the same study for the general population of adult men. At least one contributing mechanism for reduced spermatogenesis in cryptorchid testes is temperature. The temperature of testes in the scrotum is at least a couple of degrees cooler than in the abdomen. Some circumstantial evidence suggests tight underwear and other practices that raise testicular temperature for prolonged periods can be associated with lower sperm counts. One of the strongest arguments for early orchiopexy is prevention of testicular cancer.

About 1 in 500 men born with one or both testes undescended develops testicular cancer, roughly a 4 - to 40 - fold increased risk. The peak incidence occurs in the 3rd and 4th decades of life. The risk is higher for intra-abdominal testes and somewhat lower for inguinal testes, but even the normally descended testis of a man whose other testis was undescended has about a 20% higher cancer risk than those of other men.

The primary management of cryptorchidism is surgery, called orchiopexy. It is usually performed in infancy, if inguinal testes have not descended after 4-6 months, often by a pediatric urologist or pediatric surgeon, but in many communities still by a general urologist or surgeon.

Cryptorchidism: what is it? 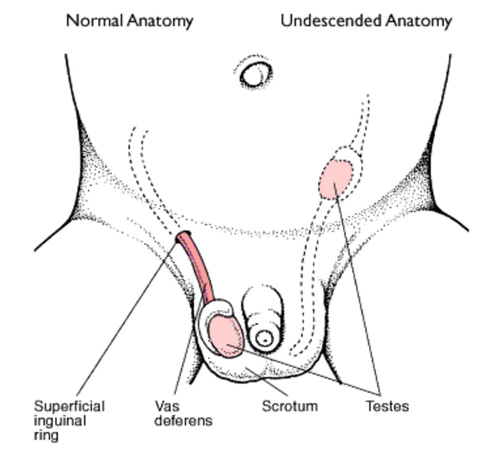 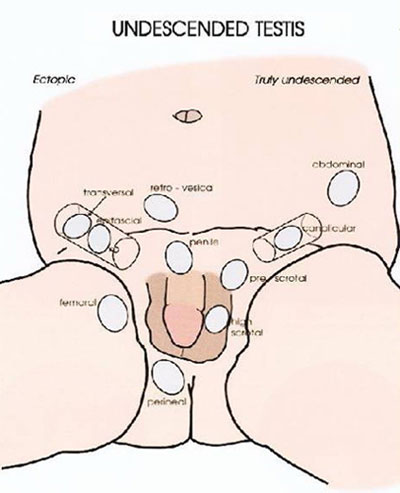 Cryptorchidism : what is it?

Evaluation and Treatment of Cryptorchidism - review 2013

Effectiveness of Hormonal and Surgical Therapies for Cryptorchidism - review 2013