Orgasm and ejaculation constitute the final phase of the sexual response cycle. To simplify , we can describe the ejaculation essentially as a “reflex” comprising sensory receptors and areas, afferent patways, cerebral sensory areas, cerebral motor centers, spinal motor centers and efferent pathways. Ejaculatory Disorders (EjD) is one of the most common male sexual disorders. The spectrum of EjD extends from premature ejaculation, through delayed ejaculation to a complete inability to ejaculate, anejaculation, and includes retrograde ejaculation and painful ejaculation. These heterogeneous dysfunctions may be either organic or functional origin.

PE is considered the most frequent self-reported male sexual dysfunction, affecting 5-40% of sexually-active men. For about a century it was thought that lifelong PE is mainly caused by psychologic factors (feeling of insecurity towards the partner, performance anxiety with a new partner…). In contrast to lifelong PE, much less attention has been paid to research of acquired PE (urologic causes: prostatitis; endocrine causes: hyper-hypothyroidism; neurologic causes: cerebrovascular accidents). Men with PE should be evaluated with a detailed medical and sexual history, and appropriate investigations, to establish the true presenting complaint and any identifying obvious biologic causes. About treatment of PE we can use drugs as SSRIs (selective serotonin reuptake inhibitors) in combination with psychotherapy.

DE is the condition wherein an abnormal stimulation of the erected penis is necessary to obtain an orgasm with ejaculation. It may be considered a slight form of anorgasmia: both can be alternatively found in the same patient. The causes of DE may be psychological or organic, such as incomplete spinal cord lesion, iatrogenic penile nerve damage, pharmacological (antidepressants, antihypertensives, antipsychotics).

A is the inability to reach orgasm and this may give rise to anejaculation. The cause is usually psychological. A is very often a primary condition.

Aj is the complete absence of an anterograde or retrograde ejaculation. It is caused by a failure of emission of semen from the seminal vesicles, the prostate and ejaculatory ducts into the urethra. True Aj is usually associated with a normal orgasmic sensation and is always connected with central or peripheral nervous system dysfunctions (autonomic neuropathy in diabetes mellitus, spinal cord injury, colorectal surgery, retroperitoneal lymphadenectomy) or with drugs (antidepressants, antipychotics, antihypertensives).

PEj is usually an acquired condition, often related to Lower Urinary Tract Symptoms (LUTS), and sometimes causes moderate sexual dysfunction. The painful sensation may be felt in the perineum, or urethra and urethral meatus. It can be caused by ejaculatory duct obstruction, all types of chronic prostatitis/chronic pelvic pain syndrome, urethritis, antidepressant drugs and psychological problems. 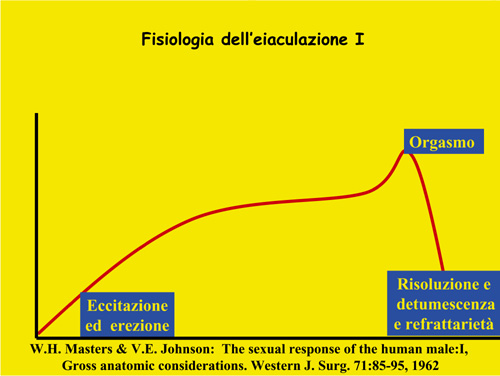 Physiology of ejaculation I 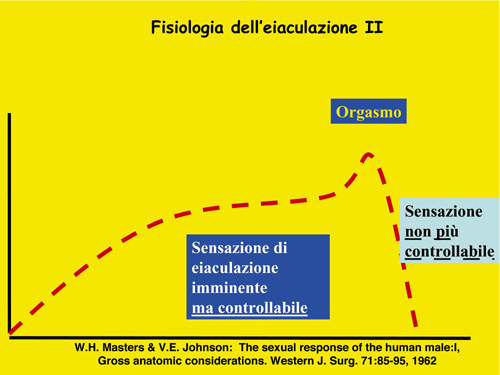 What is premature ejaculation

How is possible to solve Premature Ejaculation (explanatory video)