A sexually transmitted disease (STD), or Sexually Transmitted Infections (STI), is an illness that has a significant probability of transmission between humans or animals by means of sexual contact, including vaginal intercourse, oral sex, and anal sex. Until the 1990s, such afflictions were commonly known as venereal diseases: Veneris is the Latingenitive (possessive) form of the name Venus, the Roman goddess of love. Public health officials originally introduced the term sexually transmitted infection, which clinicians are increasingly using alongside the term sexually transmitted disease in order to distinguish it from the former. According to www.etharc.org/, sometimes the terms STI and STD are used interchangeably. This can be confusing and not always accurate, so it helps first to understand the difference between infection and disease. Infection simply means that a germ ( virus, bacteria, or parasite ) that can cause disease or sickness is present inside a person’s body. An infected person does not necessarily have any symptoms or signs that the virus or bacteria is actually hurting his or her body; they do not necessarily feel sick. A disease means that the infection is actually causing the infected person to feel sick, or to notice something is wrong. For this reason, the term STI , which refers to infection with any germ that can cause an STD, even if the infected person has no symptoms , is a much broader term than STD. Specifically, the term STD refers only to infections that are causing symptoms. Because most of the time people do not know that they are infected with an STD until they start showing symptoms of disease, most people use the term STD, even though the term STI is also appropriate in many cases. The English language has short words for two of the most common: "pox" (syphilis) and "the clap" (gonorrhea).

Commonly reported prevalences of STIs among sexually active adolescent girls both with and without lower genital tract symptoms include chlamydia trachomatis (10 to 25%), Neisseria gonorrhoeae (3 to 18%), syphilis (0 to 3%), Trichomonas vaginalis (8 to 16%), and herpes simplex virus (2 to 12%) Among adolescent boys with no symptoms of urethritis, isolation rates include C. trachomatis (9 to 11%) and N. gonorrhoeae (2 to 3%). As early as 1996, WHO estimated that more than 1 million people were being infected daily. In 2006 WHO reported in USA an incidence of 19 million new cases yearly of STD-STI. About 60% of these infections occur in young people
HIV c AIDS

AIDS or Acquired Immunodeficiency Syndrome is a disease characterized by the progressive loss of the human organism’s defense as a consequence of the action by a virus called HIV (Human Immunodeficiency Virus). The affected people are more easily exposed to diseases that normally they would easily fight, such as the common flu, which can thus become severe and in the more advanced forms even lethal. HIV is virus which would not be very resistant in the external environment, dies in contact with alcoool, bleach or the temperatures normally associated with washing machines. The route of transmission can be sexual (sperm and vaginal secretions) or following blood contact with the affected individual (needles, syringes, transfusions).

Chlamydiae are an endocellular parasite responsible for an eye disease called trachoma, and urethral infections. The incubation period can be from one to three weeks. It is transmitted only sexually. In women it can cause quite variable symptoms: recurrent cystitis, symptoms of micturition, cervicitis and adnexitis which can cause closure of the tubes with subsequent sterility. In man there can be a slight urethitis with urinary symptoms and secretions from the external urinary meatus.

Commonly known as the “rooster’s head”, these are lesions caused by HPV virus (Human Papilloma Virus). It is only sexually transmitted. The incubation period varies from a few days to several months after exposure. They are small growths of rose color, with a wrinkled surface. They can be localized in any area of the genitals (glans and urethra for man, urethra and vagina for the woman).

Gonorrhoeae is a bacterial infection. It is only transmitted sexually. The incubation period is brief (2-10 days). In man it is usually manifests with a purulent urethritis (with a yellow-greenish secretion). In the woman it shows up as a cervicitis. If not adequately treated in both sexes it can affect the whole urogenital apparatus.

It is an infection caused by a virus: Type 1 herpes simplex (HSV1) and type 2 (HSV2). The route of transmission is typically sexual. The incubation period is brief (3-4 days). The areas affected in man are: foreskin, glans, penile shaft. In woman: vulva, vagina, uterine cervix.
The lesions are small vesicles which brake rapidly and create a burning sensation and redness of the area. The virus rarely leaves the host, such that even though the primary lesion has healed it can recur even after months or years due to a lowering of local defenses.

Genital candidiasis is caused by a mycetes (Genital Candidiasis) which determines in the male an erythema and pruritus on the glans penis and the characteristic presence of a whitish coat at this level. In the woman there are whitish discharge, pain during coitus, pruritus and burning sensation.

It is caused by a bacterial infection: Treponema pallidum. It is spread exclusively sexually. The first lesion (primary lesion) which appears after 3-4 weeks from the initial contact, is usually located on the external genitals and it is generally a red nodule, oozing, which in a few days transforms itself into a non painful ulcer (sifiloma) . It can be associated at this stage with a regional lymphnodal enlargement. The sifiloma heals even spontaneously in 30-60 days. After 2-3 months diffuse rose colored patches appear over the whole body, neither painful or pruritic (secondary syphilis). Even these lesions can spontaneously disappear in 1-2 months. If this disease in not promptly diagnosed or treated adequately it can lead to spread of the illness throughout the body (tertiary syphilis) and even lead to death.

It is an infection caused by a flagellated protozoa, Trichomonas vaginalis, which can hardly survive outside the human body. It is also a usually sexually transmitted disease, but it can also occur by means of contaminated objects (towels, linen etc...) In man after 2-3 weeks from initial contact, appears a urethritis with pruritus a early morning discharge, usually clear and/or milky, from the urethral meatus. In the woman it usually shows up as vulvo-vaginitis with foamy discharges, burning and intra coitus pain.

HPV infection and the risk of penile cancer 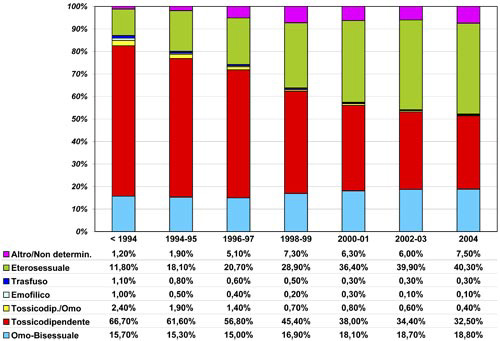 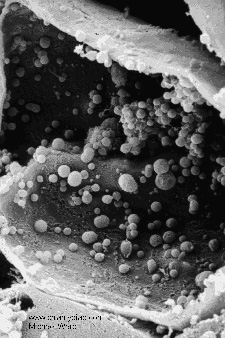 Chlamydia inside a cell 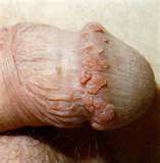 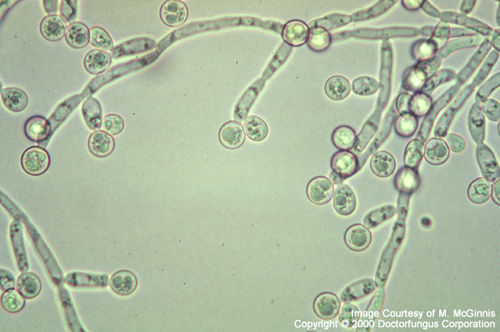 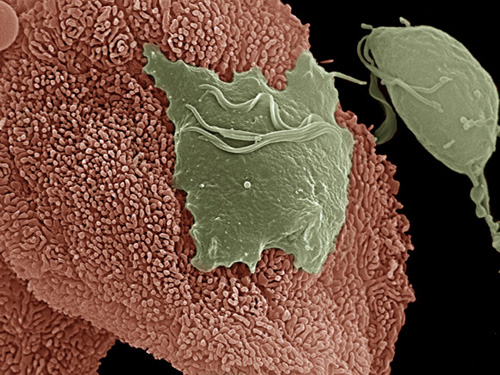