Cancer of the prostate (PCa) is now recognized as one of the most important medical problems facing the male population. In Europe, PCa is the most common solid neoplasm, with an incidence rate of 214 cases per 1000 men, outnumbering lung and colorectal cancer. Furthermore, PCa is currently the second most common cause of cancer death in men . In addition, since 1985, there has been a slight increase in most countries in the number of deaths from PCa, even in countries or regions where PCa is not common. Prostate cancer affects elderly men more often than young men. It is therefore a bigger health concern in developed countries with their greater proportion of elderly men. Thus, about 15% of male cancers are PCa in developed countries compared to 4% of male cancers in undeveloped countries. It is worth mentioning thatthere are large regional differences in incidence rates of PCa. For example, in Sweden, where there is a long life expectancy and mortality from smoking-related diseases is relatively modest, PCa is the most common malignancy in males, accounting for 37% of all new cases of cancer in 2004. The factors that determine the risk of developing clinical PCa are not well known, although a few have been identified. There are three well-established risk factors for PCa: increasing age, ethnical origin and heredity. If one first-line relative has PCa, the risk is at least doubled. If two or more first-line relatives are affected, the risk increases 5- to 11-fold. A small subpopulation of individuals with PCa (about 9%) has true hereditary PCa. This is defined as three or more affected relatives or at least two relatives who have developed earlyonset disease, i.e. before age 55. Patients with hereditary PCa usually have an onset 6-7 years prior to spontaneous cases, but do not differ in other ways. The frequency of autopsy-detected cancers is roughly the same in different parts of the world. This finding is in sharp contrast to the incidence of clinical PCa, which differs widely between different geographical areas, being high in the USA and Northern Europe and low in Southeast Asia. However, if Japanese men move from Japan to Hawaii, their risk of PCa increases; if they move to California their risk increases even more, approaching that of American men. These findings indicate that exogenous factors affect the risk of progression from so-called latent PCa to clinical PCa. Factors such as food consumption, pattern of sexual behaviour, alcohol consumption, exposure to ultraviolet radiation and occupational exposure have all been discussed as being of aetiological importance. Prostate cancer is an ideal candidate for exogenous preventive measures, such as dietary and pharmacological prevention, due to some specific features: high prevalence, long latency, endocrine dependency. Dietary/nutritional factors that may influence disease development include total energy intake (as reflected by body mass index), dietary fat, cooked meat, micronutrients and vitamins (carotenoids, retinoids, vitamins C, D, and E), fruit and vegetable intake, minerals (calcium, selenium), and phyto-oestrogens (isoflavonoids, flavonoids, lignans). Since most studies reported to date are case-control analyses, there remain more questions than evidence-based data available to answer them. Several ongoing large randomised trials are trying to clarify the role of such risk factors and the potential for successful prostate cancer prevention.

In summary, hereditary factors are important in determining the risk of developing clinical PCa, while exogenous factors may have an important impact on this risk. The key question is whether there is enough evidence to recommend lifestyle changes (lowered intake of animal fat and increased intake of fruit, cereals and vegetables) in order to decrease the risk. There is some evidence to support such a recommendation and this information can be given to male relatives of PCa patients who ask about the impact of diet.

The main diagnostic tools to obtain evidence of PCa include Digital Rectal Examination (DRE), serum concentration of Prostate-specific-Antigen (PSA) and transrectal ultrasonography (TRUS) and prostate biopsy. Its definite diagnosis depends on the presence of adenocarcinoma in prostate biopsy cores or operative specimens. Histopathological examination also allows grading and determination of the extent of the tumor.

The measurement of PSA level has revolutionised the diagnosis of PCa. Prostate-specific antigen is a kallikrein-like serine protease produced almost exclusively by the epithelial cells of the prostate. For practical purposes, it is organ-specific but not cancer-specific. Thus, serum levels may be elevated in the presence of benign prostatic hypertrophy (BPH), prostatitis and other non-malignant conditions. The level of PSA as an independent variable is a better predictor of cancer than suspicious findings on DRE or TRUS.

The need for prostate biopsies should be determined on the basis of the PSA level and/or a suspicious DRE. The patient's biological age, potential co-morbidities (ASA Index and Charlson Comorbidity Index) and the therapeutic consequences should also be considered.

The first elevated PSA level should not prompt an immediate biopsy. The PSA level should be verified after a few weeks by the same assay under standardised conditions (i.e. no ejaculation and no manipulations, such as catheterization or cystoscopy, and no urinary tract infections) in the same diagnostic laboratory, using the same methods.

The primary extension assessment of PCa is usually made by DRE, PSA measurement and bone scan, supplemented with computed tomography (CT) or magnetic resonance imaging (MRI) and chest X-ray in specific situations.

The therapeutic management of PCa, even in clinically localised disease, has become increasingly complex due to the various therapeutic options available, which have equal oncological efficacy but significantly different, treatment-related, side-effects. The incidence of small, localised, well-differentiated PCa is increasing, mainly as a result of PSA screening and 'multi-core' schemes of prostate biopsy. These data suggest that a lot of the men with localised PCa would not, in fact, benefit from a definitive treatment. With the aim of reducing the risk of overtreatment in this subgroup of patients, two conservative management strategies of 'watchful waiting' and 'active surveillance' have been proposed.

Also known as 'deferred treatment' or 'symptom-guided treatment', this term was coined in the pre-PSA screening era (before 1990) and referred to the conservative management of PCa until the development of local or systemic progression, at which point the patient would be treated palliatively with transurethral resection of the prostate (TURP) or other procedures for urinary tract obstruction and hormonal therapy or radiotherapy for the palliation of metastatic lesions.

Also known as 'active monitoring', this is the new term for the conservative management of PCa. Introduced in the past decade, it includes an active decision not to treat the patient immediately and to follow him with close surveillance and treat at pre-defined thresholds that classify progression (i.e. short PSA doubling time and deteriorating histopathological factors on repeat biopsy). In these cases, the treatment options are intended to be curative.

The surgical treatment of PCa consists of radical prostatectomy (RP), which involves the removal of the entire prostate gland between the urethra and the bladder, and resection of both seminal vesicles along with sufficient surrounding tissue to obtain a negative margin. Often, this procedure is accompanied by a bilateral pelvic lymph node dissection. In men with localised PCa and a life expectancy > 10 years, the goal of an RP by any approach must be eradication of disease, while preserving continence and whenever possible potency ( "nerve sparing" technique).

There are no randomised studies comparing RP with either external beam radiation therapy (EBRT) or brachytherapy for localised prostate cancer. However, the National Institutes of Health (NIH) consensus set up in 1988 remains available: external irradiation offers the same long-term survival results as surgery; moreover, EBRT provides a quality of life at least as good as that provided by surgery.

Besides RP), external beam radiation and/or brachytherapy, cryosurgical ablation of the prostate (CSAP) and high-intensity focused ultrasound (HIFU) have emerged as alternative therapeutic options in patients with clinically localised PCa. Whereas HIFU is still considered to be an experimental treatment, CSAP has been recognised as a true therapeutic alternative according to the guidelines of the American Urological Association. Both HIFU and CSAP have been developed as minimally invasive procedures, which have potentially the same therapeutic efficacy as established surgical and non-surgical options with reduced therapy-associated morbidity

In 1941, Huggins and Hodges assessed the favourable effect of surgical castration and oestrogen administration on the progression of metastatic PCa. They demonstrated for the first time the responsiveness of PCa to androgen deprivation. Since Huggins and Hodges' pivotal studies, androgen-suppressing strategies have become the mainstay of management of advanced PCa. If prostate cells are deprived of androgenic stimulation, they undergo apoptosis (programmed cell death). Any treatment that results ultimately in suppression of androgen activity is referred to as androgen deprivation therapy (ADT).

Even if hormonal treatment effectively palliates the symptoms of advanced disease, there is no conclusive evidence at present that it extends life.

Androgen deprivation can be achieved by:

- suppressing the secretion of testicular androgens by surgical or medical castration

- inhibiting the action of the circulating androgens at the level of their receptor in prostate cells using competing compounds known as anti-androgens.

In addition, these two methods of androgen deprivation can be combined to achieve what is commonly known as complete (or maximal or total) androgen blockade (CAB).

Surgical castration is still considered the 'gold standard' for ADT against which all other treatments are rated. Removal of the testicular source of androgens leads to a considerable decline in testosterone levels and induces a hypogonadal status, although a very low level of testosterone (known as the 'castration level') persists. The standard castrate level is < 50 ng/dL.

Long-acting LHRH agonists (busereline, gosereline, leuproreline and triptoreline) have been used in advanced PCa for more than 15 years and are currently the main forms of ADT . They are synthetic analogues of LHRH, generally delivered as depot injections on a 1-, 2-, 3-, or 6-monthly basis by initially stimulating pituitary LHRH receptors, inducing a transient rise in LH and FSH release. This then elevates testosterone production (known as the 'testosterone surge' or 'flare up' phenomenon), which begins within approximately 2-3 days of the first injection and lasts through approximately the first week of therapy. Concomitant therapy with an anti-androgen decreases the incidence of this clinical relapse, but does not completely remove the possibility of its occurrence. Anti-androgens should be started on the same day as the depot LHRH injection and should be continued for a 2-week period. Today, LHRH agonists have become the 'standard of care' in hormonal therapy because they avoid the physical and psychological discomfort associated with orchiectomy

Although castration reduces serum testosterone levels by up to 95%, an intraprostatic androgen stimulus is sustained by the conversion of circulating androgens of adrenal origin into DHT within the prostate cells. However, the action of these adrenal androgens can be blocked by the addition of an anti-androgen to either surgical or pharmacological castration, a concept known as complete (or maximal or total) androgen blockade (CAB).

Prostate: what is it?

What is Prostatic Specific Antigen (PSA)?

Prostatic cancer in the clinic of Andrologist 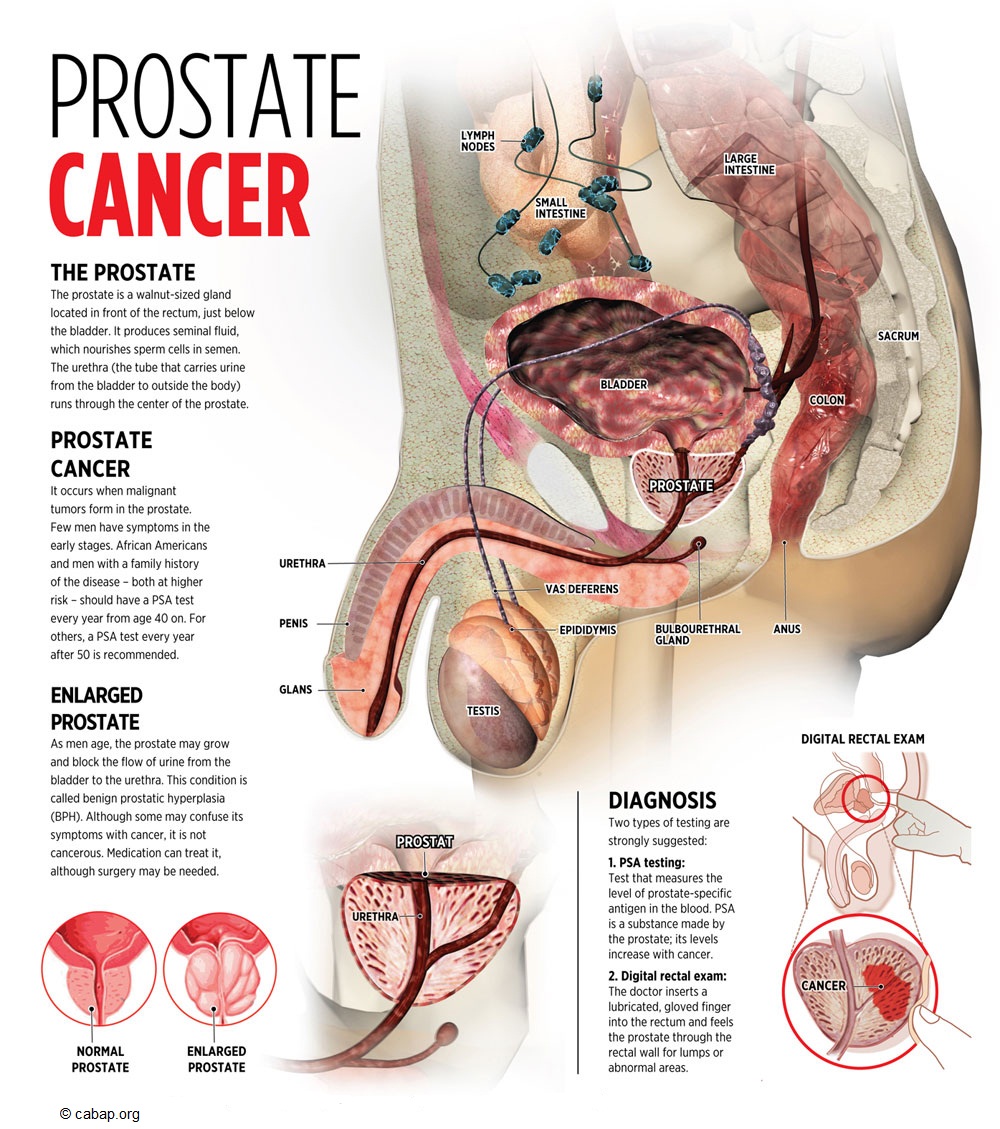 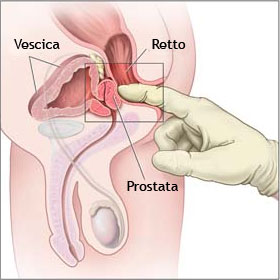 Digital examination of the prostate 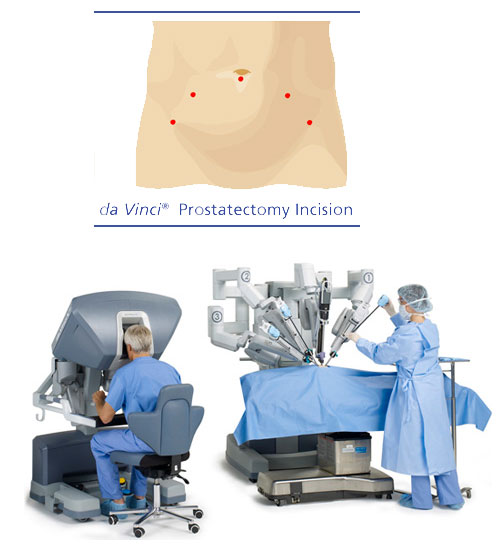 What does prostate action do?

What is Prostate Cancer?

What are the symptoms of the prostate cancer?

How is prostate cancer tested?

What is prostate biopsy

What new treatments are available for prostate cancer?

What is radical prostatectomy?

What is radiotherapy in prostate cancer?

What is ormone therapy in prostate cancer?

What is chemotherapy in prostate cancer?

What is active surveillance in prostate cancer?